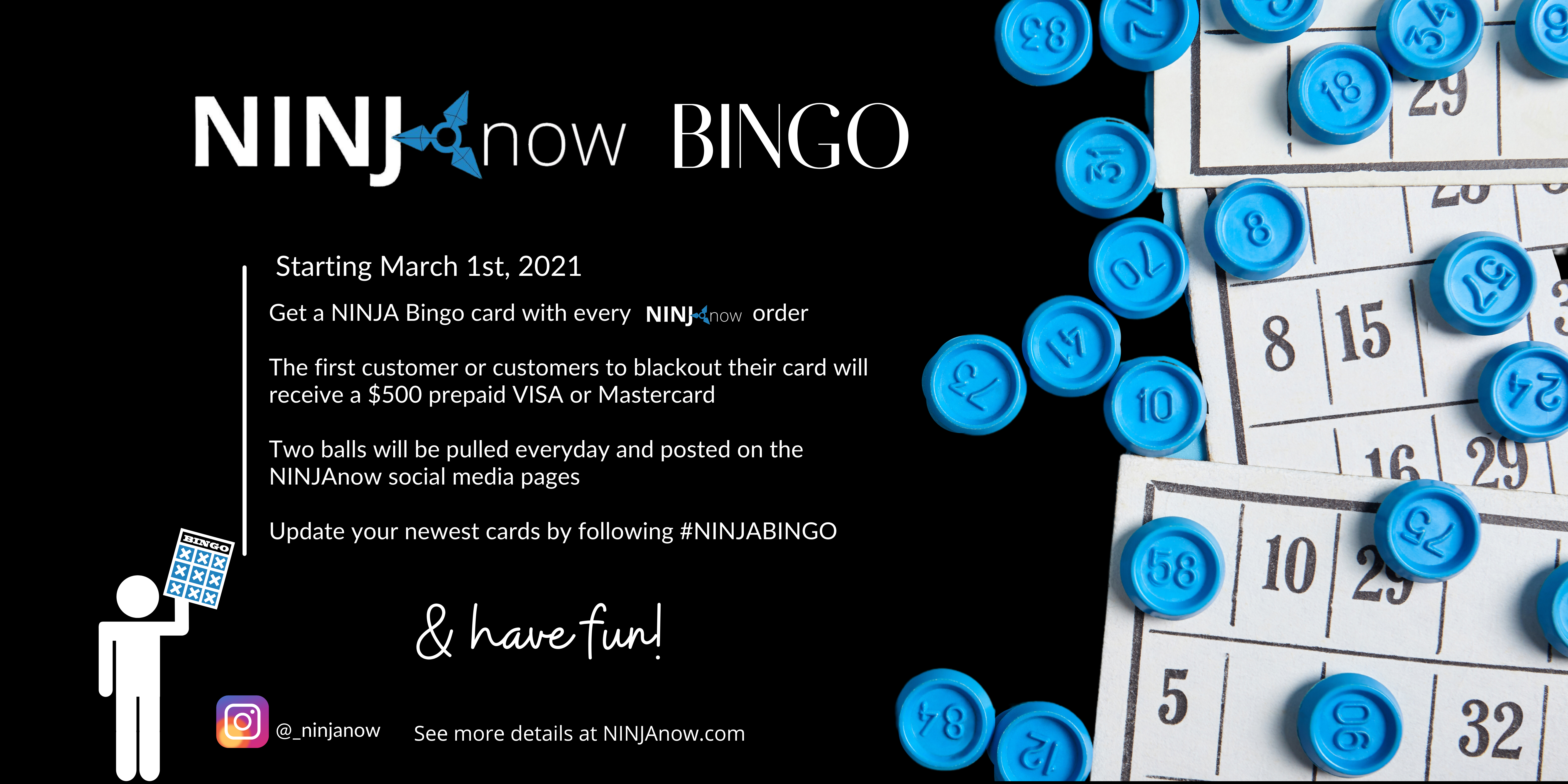 #NINJABINGO
OFFICIAL GIVEAWAY RULES
How to play!
1. With every NINJAnow delivery you place, you will receive 1 NINJA bingo card. The first player or player(s) to complete a valid 'blackout bingo card' will receive a $500 prepaid VISA or mastercard.  If there is more than one player to win a round the prize will be split.
2. Fill out your bingo card by watching our daily stories on instagram and facebook, along with posts along the way. The hashtag #NINJABINGO will be used on every daily post to make following along and updating your newest cards easier.
3. You must fill a "blackout" of all NINJA bingo squares on your NINJAbingo card using a bingo dabber of your choice.
4. To claim your win post on either Instagram or facebook, tag @_ninjanow on Instagram and @NINJAnow on facebook. With the hashtag #NINJABINGOWINNER and email social@ninjanow.com
Rules
1. You must be 19+ to play
2. When a winner is selected, the previous called "balls" will restart and the current round will end.
3. NINJA bingo will start on March 1st and continue until a winner is called.
4. With every NINJAnow delivery placed you will receive a NINJAbingo card on your drivers arrival. You may play as many NINJAbingo cards as you collect on one bingo round.
5.  To receive your daily number (two will be called daily) follow the NINJAnow social media accounts.
6. No purchase necessary
7. Only one player per bingo card

Publicity and entrant information: By participating in the Giveaway, entrants consent to the use of their name, address, postal code, telephone number, social media handles, comments, likeness and image, whether on videotape, photograph or any other means, for the administration of this Contest or any publicity carried out by the Sponsor, without further notice or compensation.

The Sponsor’s Privacy Policy applies to this contest and can be found here webpage found here: www.ninjanow.com

Law: The Giveaway is void where prohibited by law and is subject to all applicable Canadian federal, provincial, territorial, municipal and local laws. This Giveaway shall be governed exclusively by the laws of the Province of Alberta, including all issues and questions concerning the construction, validity, interpretation and enforceability of these Giveaway Rules, rights and obligations between entrants and the Sponsor, and procedural provisions, without giving effect to any choice of law or conflict of law rules.  Any dispute shall be adjudicated by the courts sitting in the City of Red Deer in the Province of Alberta.

Rule amendments: The Sponsor reserves the right, in its sole discretion, to amend or modify these Giveaway Rules, or modify, cancel or suspend this Giveaway, without prior notice for any reason whatsoever, including without limitation in the event that any cause beyond the reasonable control of the Sponsor corrupts, or threatens to corrupt the security or proper administration of the Giveaway.

Intellectual Property: All intellectual property, including but not limited to trademarks, logos, designs, promotional materials, web pages, source codes, images, drawings, illustrations, slogans and representations are owned by the Sponsor.  All rights are reserved. Unauthorized copying or use of any copyrighted material or other intellectual property without the express written consent of the Sponsor is strictly prohibited. The Sponsor’s marketing or other partners, if any, shall also have access to and rights to reproduce, copy or otherwise use any materials generated by this Giveaway or any submissions or materials generated by entrants.